A gentle technique used to soothe the nervous system. 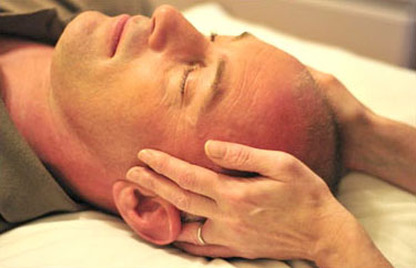 The brain and spinal cord – the two major components of the central nervous system (CNS) – require a carefully controlled physiological environment in order to develop and function efficiently and effectively. The craniosacral system is largely responsible for providing this environment.

The craniosacral system is a physiological system that meets the criteria for classification as semi-closed and hydraulic. It has a watertight boundary largely provided by the external layer of the meninges (the membranes that surround the brain and spinal cord). This external layer is known as the dura mater or dural membrane. The craniosacral system’s controlled fluid inflow is provided mainly by the choroid plexuses, with controlled outflow provided largely by the arachnoid granulation system. The fluid within the craniosacral system is cerebrospinal fluid (CSF), which is extracted from blood by the choroid plexuses and returned to blood by the arachnoid granulation system. The extraction and resorption of CSF are accomplished largely through osmotic pressures and specialized active transport mechanisms.

The functions of the CSF are carried out as it circulates within the craniosacral system. It circulates between the cells of the brain and spinal cord, and fills the spaces between cells. CSF also crosses cell membranes to enter intracellular compartments, though entry is selective. Some components of CSF are excluded. CSF functions include:

1. Floating the brain so the effects of gravity are reduced by about 75-80 percent;

2. Serving as a shock absorber so the brain is not traumatized by striking the inner surface of the cranium during sudden movements of the head or body;

3. Providing nutrients to the brain and spinal cord, as well the pituitary and pineal glands, both of which are enclosed in the craniosacral system;

4. “Washing away” metabolic waste products and toxic substances that have been deposited within and between cells of the CNS;

5. Lubricating between cells of the CNS to prevent friction or improper contact that could short-circuit electrical nerve impulses or damage cell walls; and

6. Maintaining the proper concentrations of electrolyte substances (ions) necessary for creating and transmitting nerve impulses so we can think, remember, feel and move.

The dural membranes of the craniosacral system form the lining for several cranial (skull) bones. These membranes also attach to specific areas of bone in the spinal canal. The spinal canal attachments are much more sparse than the intracranial attachments, which allows for movement of the spine. When dural membrane movements are abnormally restricted for any reason, the craniosacral system may become compromised, with secondary effects on the CNS and/or endocrine and immune systems.

The volume of CSF in the craniosacral system constantly and rhythmically rises and falls at about six to 12 cycles per minute. This ongoing volumetric change requires dural membrane boundaries to continually adapt to avoid excessive fluid pressures on the delicate brain and spinal cord structures. Part of this accommodation is accomplished by the cranial bones opening and closing minutely where they abut each other.
It is now known that under normal circumstances cranial bones do not fuse together at puberty, as was previously taught.1-6 Rather, they are in constant motion to accommodate the changing demands placed on them by the dural membrane as it adjusts to the rhythmical rise and fall of CSF volume.
Disease, dysfunction or injuries may cause loss of bone mobility in the head, spine or pelvis. Such trauma can cause craniosacral system dysfunction, with secondary ramifications in the CNS, endocrine and immune systems.

The Role of Cranial Adjusting

1. Impaired mobility of all bones related to the craniosacral system (cranium, face, vertebral column and pelvis).

Sutures (joints between cranial bones) can frequently become immobilized due to traumatic jamming, surgical procedures, cranial fractures or other injuries. All craniosacral system-related bones are vulnerable to abnormal stresses and tensions imposed by attached muscles, tendons, ligaments and fasciae.
These bones may also be motion-restricted due to the immobility of bones to which they are joined by joints, etc. For example, a leg can compromise the pelvis, which in turn can affect the sacrum to which the dural membrane is attached. The result is a strain and probable functional compromise of the craniosacral system.
The therapist locates these contributing factors and restores motion wherever possible. Thus, the therapist works with total body mobility. When full mobilization is not possible, the therapist helps the client’s body develop the best compensatory mechanisms, with the goal of compromising craniosacral system function as little as possible.

It is imperative that the dural membranes move freely in the vertebral canal, and are able to expand in the cranium. Restrictive factors include bone restrictions and abnormal tension patterns within the dural membrane itself. These are often broadcast into the cranium from ligamentous and/or muscle attachments that are excessively tight due to adhesions or cohesions formed subsequent to infections, surgical interventions, bleeding and/or toxic deposits.

3. The flow of cerebrospinal fluid and blood.

The free flow of both is estimated and enhanced as much as possible by the therapist. The membranes of the craniosacral system separate blood from CSF, but it is imperative that blood flows into the choroid plexus and through the arachnoid membrane system in order for CSF to be formed, reabsorbed, and able to do its job. Many cranial techniques focus on enhancing CNS blood supply and venous drainage. There are also many techniques that aim to accomplish the best possible CSF circulation. They are all generally modified for optimal application to each individual client.

Since the craniosacral system has such influence on the physiological environment of the brain and the two aforementioned glands, many integrative processes between the psyche and the body emerge.
The advanced therapist is trained to assist this integrative process through the use of the hands, as well as by verbally encouraging images that may begin to surface in the client’s conscious awareness during a session. The therapist may encourage the client to understand the meaning of the images to get in touch with his or her bodily functions and how he or she may be able to favorably influence them.

Cranial adjusting, just like chiropractic spinal manipulation, primarily facilitates processes that enhance the body’s innate abilities for natural healing. Cranial therapy focuses on removing restrictive forces and obstacles related to the craniosacral system. Enhancing the mobility of the craniosacral system improves the circulation of both blood and CSF to the brain, spinal cord, pituitary gland, pineal gland and the cranial nerve systems, among other things.

Improving fluid motion and exchange specifically enhances the functions of the brain; spinal cord; autonomic control systems; visual, auditory, olfactory and gustatory sensory systems; motor and motor coordination systems; endocrine system; and the immune system. Less directly, it seems to affect all other body systems; therefore, it is exceptionally useful for most chronic conditions and as a preventive measure.